„One plus one, that makes two …“ sang Hildegard Knef, and the finite began with the two. We were split into two genders, the two introduced dualism, it is the counterpart to one, the two lives off of contradiction and it’s supposed to be more beautiful as a couple. Antje Pfundtner and Silke Hundertmark dance a duet as a math equation and offer multifarious options of togetherness.
They double, repeat, oppose one another … they use the time that is available to them to listen. For Antje Pfundtner and Silke Hundertmark, 1+1 = is an attempt at remaining next to one another, at breaking through result-driven expectations and at confronting themselves with the moment – with that which remains. The split gaze onto the mechanisms of attention creates a space for two dancers’ intermediate steps, sounds and shouts.

„The eyes of an animal are, when they observe a human being, attentive and alert. The same animal looks at other animals in the same way. No special gaze is reserved for human beings. But no other species other than humans will have a sense that the animal’s gaze is familiar. The gaze enraptures other animals. A human, when he reciprocates the gaze, becomes conscious of himself. The animal observes him precisely, over a small chasm of non-understanding. The human being also gazes over a similar, if not identical, chasm of non-understanding. Wherever he looks. He always looks over a chasm of uncertainty and fear.“
John Berger: „Das Leben der Bilder oder die Kunst des Sehens“

„VERTANZT“ is a production by Antje Pfundtner in co-production with Kampnagel Hamburg and FFT Düsseldorf. Supported by the Kulturbehörde der Freien und Hansestadt Hamburg, the Fonds Darstellende Künste e.V. and the Kunststiftung NRW. 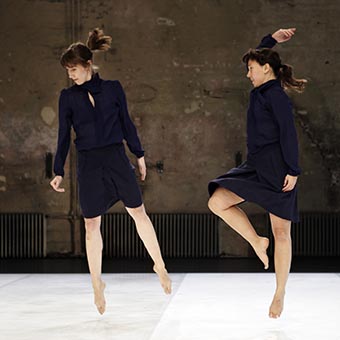 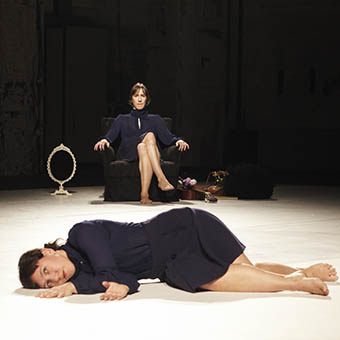 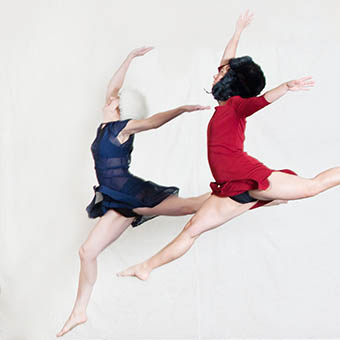 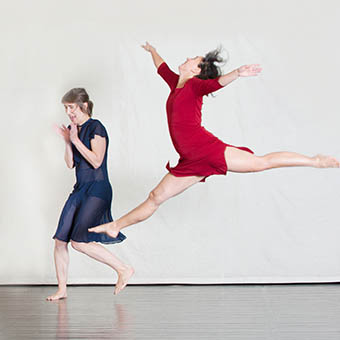 „The bizarre humor that is ingrained in ‚Vertanzt‘ reminds one of Beckett and Lewis Caroll in its language games. And something else attracts attention. Pfundtner and Hundertmark are not in search of beauty – in fact, they even deny it – but manage to create it in the end anyway. Absolutely worth seeing.“ Thomas Hag/ NRZ

„They echo the forms, mirror and repeat them, separate and synchronous. Past and future are an odd couple. The intelligent game of same and different has an absurd humor.“ Melanie Suchy/ Rheinische Post

„What connects, is common or congruent is highlighted as much as what separates us, pushes us away or is contradictory. Antje Pfundtner develops a funny, grounded language of movement that gives the piece an odd cheerfulness despite all depth. (…) It is a piece that one leaves as cheerful as one is thoughtful – and one is happy to continue thinking about questions of togetherness.“ Annette Bopp/ www.tanznetz.de