„How would you disappear, how would you do it?“ „It doesn’t work… but when the world goes under, then it would work.“
„How do you get something to disappear?“ „By taking it home and putting in the cupboard.“
„Why would you reappear after having disappeared?“ „Because I’m hungry.“

Is a performance different depending on whether children or adults watch it? And can one better anticipate and satisfy the expectations of a young audience than an adult one?

In her pieces for children and young adults („nimmer“ and „Für mich“), Antje Pfundtner in Gesellschaft researches the interfaces and differences between target groups and devotes itself to the question of how adults and children or young adults share a performance. Can a performance carry two such different audiences? And which piece is created from the coexistence of children and adults?

Whether it is labeled as a children’s or young adults’ piece, the works by Antje Pfundtner in Gesellschaft leave their audiences with the timeless and ageless question: „How do things go on after the here and now?“

In „nimmer & nimmermehr“, Antje Pfundtner asked children in grade school and adults about their personal experience and the way they dealt with disappearing.

„nimmer“ is the children’s version of the project:

All of us can tell stories about things or people that or who have disappeared: in a sudden, mysterious or sad way, surprisingly or planned. But how does disappearing work? Can you see disappearance?

The children all agreed on one thing: nothing can disappear for ever, because everything that has disappeared resurfaces somewhere sooner or later – with another name, in another form, in memories, in stories, within you.

In „nimmermehr“, the continuation of the piece (premiere at Kampnagel Hamburg in May 2015), Antje Pfundtner has expanded the inquiry and explores the rules of disappearance with an adult audience. 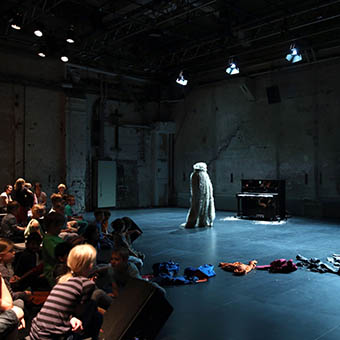 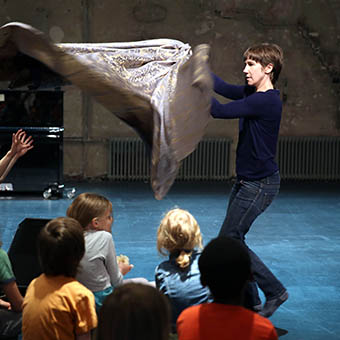 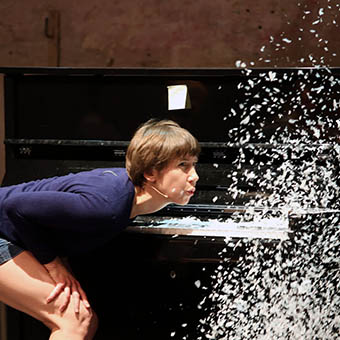 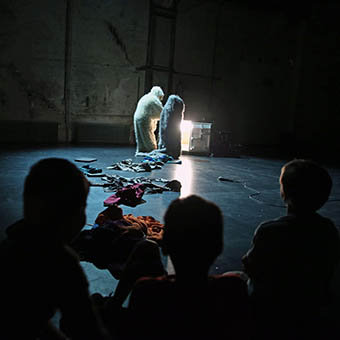 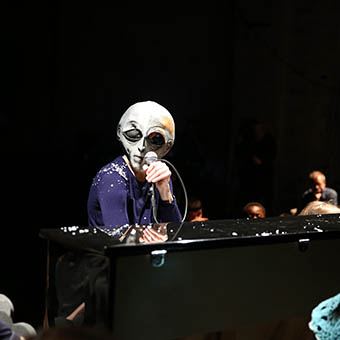 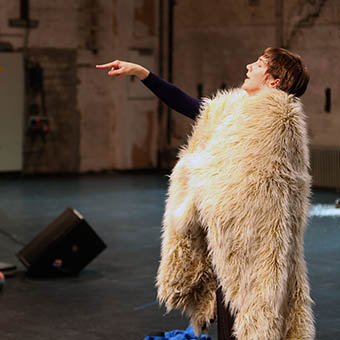 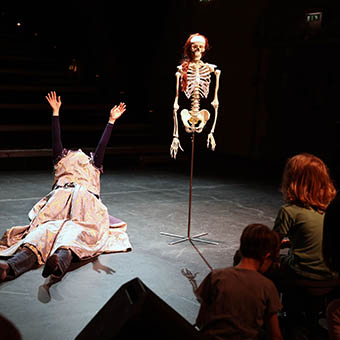 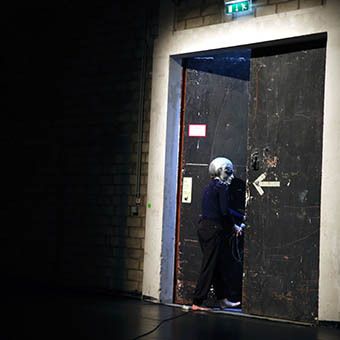 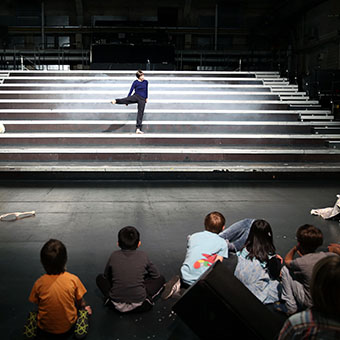 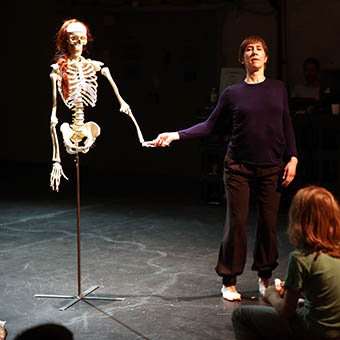 „‚nimmer’ takes us along to daring narrative and spatial constructions that deal with stone soups, cringing, a skeleton, snow and lost socks. Transience suddenly appears in the presence of the performer and in her movements and stories. ‚nimmer’ requires that the audience is patient: in a musically terse fog, reading traces is not always easy when everything that was, that is, that will be in the same moment reveals its own fragile order while disappearing. Impressively concrete, remarkably direct and significantly different: ‚nimmer’ presents us this transience with an ease that tells of what has disappeared and been rediscovered – all without sorrow. ‚nimmer’ creates moments in which we recognize an infinite space of permanently repeating processes in the presence of movements. The compositions of the astonishing – these questions of disappearing and rediscovering – are presented by a body in the movement through space. For the audience, Antje Pfundtner is a mirroring partner that gets unbelievably close and then moves far away. Just like a surveyor maps a territory, she constantly investigates the theatrical space in a new way. She discovers bizarre things and unveils all sorts of absurdities that skillfully intertwine comedy (how does a child get into a refrigerator?) or tragedy (the dancing skeleton). Our ideas of and thought models for transience shimmer through the revealing and hiding. It animates one to pause for a moment as well as bounce off the walls.“ Steffen Moor/ Curator „Augenblick mal!“ Festival 2015

„Why does this apparently unassuming performance work so well for both children and adults respectively? Because – and this should always be the case in choreographic works – power lies in measure and a precise categorization of things. Here words and space, there movement and sound, in a game with fantasy as a sister of truth. And truth is, as we know, concrete.“ Boris Michael Gruhl/ tanznetz.de

„I thought a lot about this performance afterwards and have come to the conclusion that it demonstrates a great knowledge about children as an audience. Here, the artist used her understanding of children’s being to challenge the general understanding of ‚theater for children’. She meets the children on their own terms, but in a brave, unusual and other form. And finally, she faces the seriousness of children’s assumptions about transience and loss in a smart and simultaneously original way.“ Mariken Lauvstad

„The ‚hopeful’ label should apply to her as a choreographer-dancer, but it also applies – with her as their representative – to all artists who explicitly direct a piece to a specific audience. The target group has a name: children. Still, in Pfundtner’s case, anyone can watch her piece. Better yet: should watch it! Pfundtner’s ‚nimmer’ is intelligent (…), it has humor.“ Melanie Suchy/ Zeitschrift „tanz“

„nimmer“ can be performed in German, English and Dutch!